Charming places of interest just a few kilometers away

Ancient town, rich in art and history; what to see: the Bridge of Augustus, Palace “dei Priori”, The Town hall, La Rocca “the fortress” that overlooks the city, built in 1374 on behalf of cardinal Albornoz, and Underground Narni, a fascinating visit back in time to the discovery of aqueducts, cisterns and mysterious secrets of the Inquisition..

Ancient city of Etruscan origins, Orvieto is world famous for its wine and for the Duomo, a masterpiece of gothic architecture of the center of Italy. As it is usually narrated, the construction of the cathedral was commissioned by pope Urban IV in order to give a suitable collocation to the blood stained holy Corporal, one of the fundamental eucharistic miracles in the Christian world that took place in 1263 in Bolsena. You can also visit: Pozzo (well) di San Patrizio, the medieval Palazzo Papale which now hosts The National Archaeological Museum, San Giovenale church.

Civita di Bagnoregio, known as “the Dying City”, for its fewer than a dozen permanent residents and for the earthquakes and landslides that have threatened its survival since the 17th century. Standing on a tuffy plateau and surrounded by ravines, Civita offers one of the most extraordinary and unique landscapes.

Located in the Parco Fluviale del Nera, with its 165 meters in 3 jumps, is the highest in Europe. Marmore Falls is an artificial waterfall, created in the 3rd century BC and commissioned by the Roman consul Manius Curius Dentatus.
With its astonishing beauty, it represents the jewel of a territory rich in remarkable cultural, historical and natural sites.

Viterbo is known as “the City of Popes”, Città dei Papi, because it was the papal seat from 1257 to 1281. Palazzo dei Papi, the most emblematic building of the city, hosted the first and longest conclave in history. Surrounded by impressive city walls, Viterbo is also the “city of beautiful fountains” for its numerous medieval fountains and its noble palaces are a symbol of the city’s glorious past. Don’t miss a visit to Quartiere San Pellegrino, the medieval quarter which is almost unchanged after 800 years. The transport of the Macchina di Santa Rosa is the most important event of the city of Viterbo. The Macchina di Santa Rosa is an enlighted tower, with a height of 30 meters and a weight of about 5 tons. Every year, on the 3rd of September, it is carried on shoulders by over 100 men, called ‘facchini’, across the streets of the town center.

A picturesque town which overlooks the shores of the lake of the same name, is known for the Eucharistic Miracle of Corpus Domini occurred in 1263. In the Basilica of Santa Cristina, it is possible to see the altar where the miracle took place, and the blood-stained stones of the miracle.

Farnese Palace, with its superb Italian gardens surrounded by the green Cimini hills, is one of the finest examples of Renaissance architecture in Europe.
The construction of the building, with its distinctive pentagonal shape, was entrusted from Alessandro Farnese (who became Pope Paul III).
This palace is famous not only for its pentagonal shape but also for its spiral staircase or ‘Scala Regia’, the circular courtyard, the interiors filled with large frescoes, and the Italian Gardens.

Villa Lante, which is actually made up of two almost identical houses, was built in the mid XVI century. It was designed for Cardinal Gianfrancesco Gambara by Jacopo Barozzi da Vignola.
Villa Lante is widely considered a true masterpiece of Renaissance architecture and one of the best examples of Italian gardens, with innovative solutions in landscape and aquatic design.

Located beneath Bomarzo, on the bottom of a valley scattered with huge volcanic rocks, lies one of the most singular gardens that architectural history has ever known. Huge statues carved out of peperino, enourmous pagan gods, vases as big as elephants, incredible leaning constructions, exotic animals, sphinxes, dragons an a frightful mask with its mouth open. The garden, commissioned by Prince Pier Francesco Orsini (1545-1585), was created according to Late Renaissance mannerist culture and style. Its monsters, giants and scenic inventions are a prelude to the Baroque.

What travellers love about us…

In fact, from our Hotel you can easily reach: 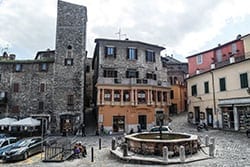 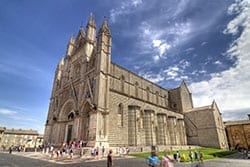